COULD AMERICAN PIE HOLD KEY TO THE GRAND FINAL

As recently as last week, if you had suggested that Mason Cox could dominate a grand final and be Collingwood’s main man, you may have been laughed out of town.

Sure, the 211cm giant had enjoyed a breakout season and become a cult figure to the Black and White Army, but after he ruled the airways to drag down 11 marks against Richmond in the preliminary final the conversation became very different.

Remember, this is a bloke who hadn’t picked up a Sherrin five years ago. Hadn’t grown up with the game. Hadn’t mastered some of the nuances. But he sure as hell had proved he could jump and he could take a mark.

Recruited from Oklahoma State University (OSU), Cox became the tallest player ever measured at an AFL Combine in 2014.

He also boasted incredible athleticism which saw him record elite vertical jump scores, including the second highest left-footed running leap ever documented by the AFL in 20 years of testing.

He also had impressive speed and agility for his height, completing the 20-metre sprint in three seconds flat.

“Most elite midfielders would be pumped with 2.9seconds over 20 metres.

“Nic Naitanui runs it in 2.88, which is quite a feat for a player his size.

“He also runs the 3K time trial in around 12 mins, which is great for a 211cm player. This is a key in deciding if a player will make it to the AFL because if you have poor endurance capacity you will get found out.

“Mason’s sporting background combined with his physical attributes give him the best foundations for a potentially promising AFL career.

Scott Pendlebury tunes up for the GF.

“He played soccer from the age of 5-18 before growing quickly and then converting to basketball.

“Recruiters estimate that close to 80% of current AFL players have a junior background in basketball and Collingwood have two perfect examples in Mason Cox and Scott Pendlebury.”

Since making his AFL debut in 2016, Cox’s progress has been stunning.

Of those 11 marks against the Tigers, eight were contested, taking his tally for the season to 58 contested marks, second only to another man looking to light up the MCG this Saturday, Jeremy McGovern (64).

Cox will be Collingwood’s primary target once the ball is forward of 50 and if he doesn’t mark it then the Pies fleet of small/fast forwards will swoop on the crumbs.

The Eagles are 18th in the league for defensive 50 ground ball differential so they could be in all sorts if the American Pie does what he did last week.

After his match-winning display against the Tigers, Cox was quick to praise ruckman Brodie Grundy for the supply to the forward line and as he has done all season Grundy will hold the key for Collingwood.

If the Eagles can nullify Grundy then they can win. If Grundy dominates the ruck and the supply to forward 50 is slick then the Pies can complete a fairytale premiership. 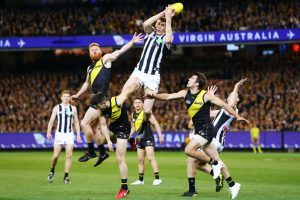 Mason Cox dominated the Tigers with a staggering 11 marks.