Jeremy McGovern stands tall when it matters most

For much of grand final week the talk surrounding West Coast’s Jeremy McGovern was whether he would even take his place on the game’s biggest stage.
McGovern took a whack on his hip in the preliminary final win over Melbourne and was in doubt right up until Friday when he had to pass a fitness test.
It was later revealed the star defender had suffered internal bleeding and was touch and go all week – but when the game was on the line and the Magpies were pushing for a match-sealing goal inside the last few minutes, the three-time All Australian launched himself into the sky and pulled down a magnificent contested mark to set in motion the chain of play that would lead to Dom Sheed’s winner.
“I just didn’t want to let the team down. I didn’t want to become a burden on the day, and if I ran out there and I was off for the last three quarters then it wouldn’t be great for the team. It was more down to the team decision and not worrying about myself,” McGovern said after the match.
In the final analysis, McGovern’s stats read 14 disposals and nine marks – none more courageous or more crucial than the last-ditch grab with a couple of minutes to play with the Pies up by two points and looking like they could seal it.
Grand finals are full of tales of bravery. Of men who defy pain and pressure to stand tall on the game’s biggest stage. With the game seemingly slipping away from them in the opening quarter the Eagles turned to Tom Barrass and Will Schofield to try and put the clamps on in defence and they answered the call.
Norm Smith Medal winner Luke Shuey was supreme and Josh Kennedy sensational as the Eagles clawed their way back. Spurred on by their 2018 motto of “head, heart and guts” the men from the west refused to panic after the early onslaught and stuck to the processes that had gotten them to the decider.
And when McGovern’s moment came in the frantic closing minutes he was up to the challenge, pulling down a mark that will live long in Eagles folklore. 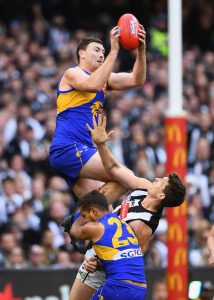 Jeremy McGovern’s mark in the dying minutes of the grand final could be the most important of his career.