Brave Treloar ran himself to a standstill for Pies

It’s inevitable that when you lead a grand final for all but six minutes and end up losing by less than a kick, the post-mortems will be full of ‘what ifs’ and ‘maybes’ and ‘did I do everything I could for the team?’
Quite simply, the Magpies side which went down to the Eagles in an epic grand final had many heroes and no one should be questioning their performance.
The Pies were magnificent – coming from 13th in 2017 to emerge as a genuine contender. Knocking off GWS and Richmond during September to be part of the last Saturday in September and go within an ace of collecting the flag.
Among their many heroes was former Giant Adam Treloar, whose 26 disposals and 11 tackles put the exclamation mark on a rollercoaster season which saw him battle a severe hamstring injury and anxiety to play a key role in Collingwood’s run to the decider.
When Treloar tore his hamstring off the bone in round 14, his prospects of even making it back to the field were slim. Let alone making it back with 24 touches, 13 contested possessions and six clearances in the qualifying final against West Coast. And then 29 disposals and four marks against his old club in the semi-final.
The midfield maestro has spoken openly about the mental demons which are so much tougher to beat than any rival. Spoken of his unique relationship with coach Nathan Buckley, with whom he shares a bond much tighter than simply player and coach.
Having retuned to full fitness and found a happy head space, Treloar set about stamping his authority on the finals series, and his last four games were among his best of the season.
In the final wash-up, his classy and committed grand final display would end in heartbreak, just as did for all his team-mates and their army of supporters.
But Treloar had given his all and left nothing in the tank. And no one can ask more than that. 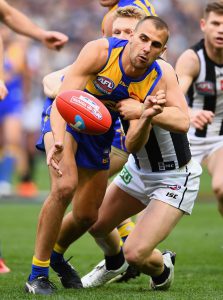 Adam Treloar cranks up the pressure with one of his 11 tackles in the decider.