Collingwood, who are playing in their first grand final with Nathan Buckley at the helm, have risen up from 13th in 2017 riding a wave of momentum into the grand final.  Given that the 2018 season represents the biggest year-on-year leap in Collingwood’s history – the previous best being from 12th in 1976 to second overall in 1977- they have every reason to believe they can get the job done at the MCG on Saturday.

And they’ll have the benefit of huge crowd support as the Black and White Army takes over footy’s most famous stadium.

The Eagles are back in the grand final for the second time under Adam Simpson’s coaching, vying for their fourth premiership.

Their most recent experience on footy’s biggest stage was one they’d rather forget – a 46-point loss to Hawthorn in 2015. No fewer than 12 of the players who suffered that heartbreak three years ago are back to try and make amends, including Shannon Hurn, Jack Darling, Josh Kennedy and Elliot Yeo.
The experience of playing in that Grand Final and how best to prepare for the game, with all the fanfare that comes with a Grand Final, will benefit those players immensely.

Although the two clubs have played each other in seven previous finals, including this year’s qualifying final which the Eagles won, this is their first meeting in a Grand Final.

Back in round eight, we beat the Pies by 21 points at the MCG. It was a tough day for Collingwood, but Jeremy Howe (30 possessions), Adam Treloar (34) and Steele Sidebottom (30) stood tall and I expect Steele to be critical again on Saturday.

In round three we lost to the Eagles by 15 points, and they got great input from Liam Ryan and Mark LeCras with three goals each. At that early stage of the year not many people would have predicted the Eagles would win their next eight on the bounce and go on to finish second on the ladder with a 16-6 record.

The two clubs have developed distinctive, and so far successful, styles of play.

The Magpies’ ball movement has shifted from a dominant boundary style in 2017 and early 2018 to taking teams on with chain handballs and run.

Their midfield ball movement has become more direct and tends to come through a wide corridor, with 35% of their possessions coming in this space to place them fourth in the AFL.

Collingwood’s style is based around high possession (1st in the AFL for disposals) and flicking the ball around in a similar fashion to the Western Bulldogs in 2016, resulting in a high level of uncontested possessions (2nd in the AFL).

They are No.1 in the AFL for handballs and will be attempting to run and chain through the Eagles and expose them out the back with their fast transitioning small players.

The Pies will be looking to maintain pressure around the ball, and then move the ball quickly to prevent giving the Eagles backs any time to set up. 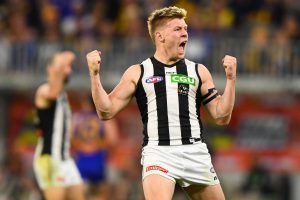 Jordan de Goey was well held by the Eagles in the qualifying final with 11 touches and two goals.

The Eagles on the other hand are strong in the air at both ends and, in contrast to the Pies, tend to play a more kick-mark controlled game where they own possession.

This also gives time for their defenders to set up which is another strong point of their game style.

They are 1st in the AFL for kicks and 2nd for short kicks and uncontested marks.

Having tall targets in their team – Scott Lycett, Nathan Vardy, Jack Darling and Josh Kennedy – gives the Eagles contested marking targets, and they are 1st in the comp for this.

This also gives them long down the line options to move the ball and gain territory (2nd for boundary ball movement).

How they will look to score

The Eagles offence starts through a defensive system where they drop off and work on intercepts, where they are 2nd in the AFL behind only Richmond. This kick starts their ball movement.

They are just above the average in the AFL for going from their defensive 50 to their attacking 50 when they gain a defensive 50 possession, but they are great at scoring off these, ranking the 3rd best in the AFL).

The Eagles have scored from 46.5% of inside 50s throughout the season and are No.1 for goals from inside 50. During the finals their score per inside 50 has risen to 55.3%, with Kennedy and Darling their key targets.

West Coast will look to win the ball, especially in their defensive 50 and then counterattack. They will try to control their attack with their short build up kicks and regularly get the ball into the 50, and if they do, the Magpies backs will be under immense pressure. 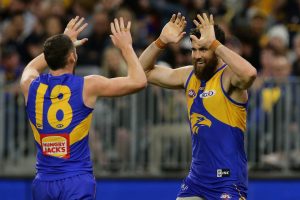 If Josh Kennedy kicks a bag the Eagles are well on their way to a fourth premiership.

Mason Cox and Jordan De Goey will be key targets for Collingwood. Once the ball is forward of centre they will be relying on Cox to be the primary target to mark or bring the ball to ground to create opportunities for their fast, high pressure small forwards.

West Coast is 18th for defensive 50 ground-ball differential, meaning if they don’t intercept a Pies inside 50, and the ball is bought to ground, then this will favour the Magpies.

Collingwood’s top four goal kickers this year are their small forwards in De Goey, Hoskin-Elliott, Thomas and Jaidyn Stephenson, which is again why the Pies will be happy with inside 50’s that are bought to ground by their talls.

Scores from clearances are very similar, but in scores from turnovers the Eagles have a slight advantage this season, leading +12.3 (4th in the AFL) to the Magpies +7.7 (6th in the AFL)

Contests are usually a critical part of Grand Finals. The approach to contests has been a key area of difference between the two teams during the season.

Interestingly during the finals, the Eagles have become No.1 in the contested possession differential. Contested marks make up a big part of this difference and may be a critical factor if they can continue this trend through the grand final.

This is often where the game is won and lost so it will be interesting to see if the Eagles can maintain their ferocity around the contest.

Both teams tend to focus on themselves and will be looking to play to their strengths and the key things that got them to the grand final.

They will also be looking for ways to effectively disrupt the opposition’s key strengths without taking away from their own.

A lot of thought will be given to key match-ups and potential tags – what do you sacrifice for a potential gain?

Coached by two men who enjoyed stellar playing careers before going into the coaching ranks, both sides will be prepared to the minute and ready to play.

They will need to bring their most competitive mindsets to be ready for the ferocious start to the grand final and persist, contest by contest, until the final siren.

While Collingwood will get some benefit from playing in Melbourne at their home at the MCG, the Eagles will have benefitted from their 2015 grand final experience and will take some confidence from having beaten Collingwood at the MCG in round 17.

This game is unlikely to be a blowout. With two very evenly matched teams, playing different styles, the contest may develop into a very tight game.